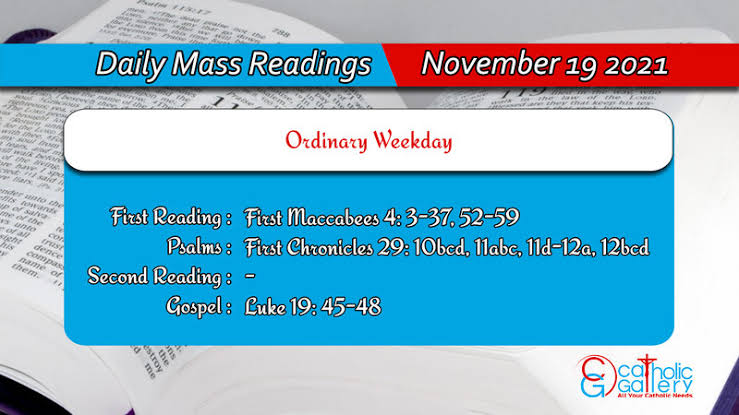 Welcome to Catholic Daily Mass Readings Friday, 19 November 2021. May the Almighty Father bless you through this Holy mass. God bless you! Kindly share with other people.

4 For as yet the army was dispersed from the camp.

5 And Gorgias came by night into the camp of Judas, and found no man, and he sought them in the mountains: for he said: These men flee from us.

6 And when it was day, Judas shewed himself in the plain with three thousand men only, who neither had armour nor swords.

7 And they saw the camp of the Gentiles that it was strong, and the men in breastplates, and the horsemen round about them, and these were trained up to war.

8 And Judas said to the men that were with him: Fear ye not their multitude, neither be ye afraid of their assault.

9 Remember in what manner our fathers were saved in the Red Sea, when Pharao pursued them with a great army.

10 And now let us cry to heaven: and the Lord will have mercy on us, and will remember the covenant of our fathers, and will destroy this army before our face this day:

11 And all nations shall know that there is one that redeemeth and delivereth Israel.

12 And the strangers lifted up their eyes, and saw them coming against them.

13 And they went out of the camp to battle, and they that were with Judas sounded the trumpet.

14 And they joined battle: and the Gentiles were routed, and fled into the plain.

15 But all the hindmost of them fell by the sword, and they pursued them as far as Gezeron, and even to the plains of Idumea, and of Azotus, and of Jamnia: and there fell of them to the number of three thousand men.

16 And Judas returned again with his army that followed him,

17 And he said to the people: Be not greedy of the spoils: for there is war before us:

18 And Gorgias and his army are near us in the mountain: but stand ye now against our enemies, and overthrow them, and you shall take the spoils afterwards with safety.

19 And as Judas was speaking these words, behold part of them appeared looking forth from the mountain.

20 And Gorgias saw that his men were put to flight, and that they had set fire to the camp: for the smoke that was seen declared what was done.

21 And when they had seen this, they were seized with great fear, seeing at the same time Judas and his army in the plain ready to fight.

22 So they all fled away into the land of the strangers.

23 And Judas returned to take the spoils of the camp, and they got much gold, and silver, and blue silk, and purple of the sea, and great riches.

24 And returning home they sung a hymn, and blessed God in heaven, because he is good, because his mercy endureth for ever.

25 So Israel had a great deliverance that day.

26 And such of the strangers as escaped, went and told Lysias all that had happened.

27 And when he heard these things, he was amazed and discouraged: because things had not succeeded in Israel according to his mind, and as the king had commanded.

28 So the year following Lysias gathered together threescore thousand chosen men, and five thousand horsemen, that he might subdue them.

29 And they came into Judea, and pitched their tents in Bethoron, and Judas met them with ten thousand men.

30 And they saw that the army was strong, and he prayed, and said: Blessed art thou, O Saviour of Israel, who didst break the violence of the mighty by the hand of thy servant David, and didst deliver up the camp of the strangers into the hands of Jonathan the son of Saul and of his armourbearer.

31 Shut up this army in the hands of thy people Israel, and let them be confounded in their host and their horsemen.

32 Strike them with fear, and cause the boldness of their strength to languish, and let them quake at their own destruction.

33 Cast them down with the sword of them that love thee: and let all that know thy name, praise thee with hymns.

34 And they joined battle: and there fell of the army of Lysias five thousand men.

35 And when Lysias saw that his men were put to flight, and how bold the Jews were, and that they were ready either to live, or to die manfully, he went to Antioch, and chose soldiers, that they might come again into Judea with greater numbers.

36 Then Judas, and his brethren said: Behold our enemies are discomfited: let us go up now to cleanse the holy places and to repair them.

37 And all the army assembled together, and they went up into mount Sion.

52 And they arose before the morning on the five and twentieth day of the ninth month (which is the month of Casleu) in the hundred and forty-eighth year.

53 And they offered sacrifice according to the law upon the new altar of holocausts which they had made.

54 According to the time, and according to the day wherein the heathens had defiled it, in the same was it dedicated anew with canticles, and harps, and lutes, and cymbals.

55 And all the people fell upon their faces, and adored, and blessed up to heaven, him that had prospered them.

56 And they kept the dedication of the altar eight days, and they offered holocausts with joy, and sacrifices of salvation, and of praise.

57 And they adorned the front of the temple with crowns of gold, and escutcheons, and they renewed the gates, and the chambers, and hanged doors upon them.

58 And there was exceeding great joy among the people, and the reproach of the Gentiles was turned away.

59 And Judas, and his brethren, and all the church of Israel decreed, that the day of the dedication of the altar should be kept in its season from year to year for eight days, from the five and twentieth day of the month of Casleu, with joy and gladness.

10bcd Blessed art thou, O Lord the God of Israel, our father from eternity to eternity.

11abc Thine, O Lord, is magnificence, and power, and glory, and victory: and to thee is praise: for all that is in heaven, and in earth, is thine.

11d Thine is the kingdom, O Lord, and thou art above all princes.

12a Thine are riches, and thine is glory.

12bcd Thou hast dominion over all, in thy hand is power and might: in thy hand greatness, and the empire of all things.

27 My sheep hear my voice: and I know them, and they follow me.

Gospel: Luke 19: 45-48
45 And entering into the temple, he began to cast out them that sold therein, and them that bought.

46 Saying to them: It is written: My house is the house of prayer. But you have made it a den of thieves.

47 And he was teaching daily in the temple. And the chief priests and the scribes and the rulers of the people sought to destroy him:

48 And they found not what to do to him: for all the people were very attentive to hear him.