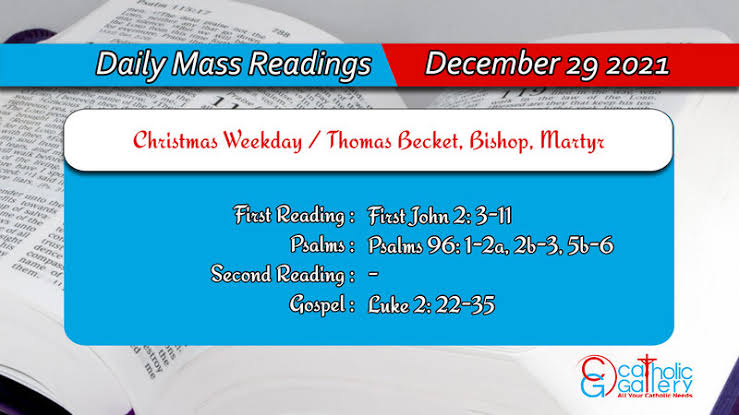 First Reading: First John 2: 3-11
3 And by this we know that we have known him, if we keep his commandments.

4 He who saith that he knoweth him, and keepeth not his commandments, is a liar, and the truth is not in him.

5 But he that keepeth his word, in him in very deed the charity of God is perfected; and by this we know that we are in him.

6 He that saith he abideth in him, ought himself also to walk, even as he walked.

8 Again a new commandment I write unto you, which thing is true both in him and in you; because the darkness is passed, and the true light now shineth.

9 He that saith he is in the light, and hateth his brother, is in darkness even until now.

10 He that loveth his brother, abideth in the light, and there is no scandal in him.

1 Sing ye to the Lord a new canticle: sing to the Lord, all the earth.

2a Sing ye to the Lord and bless his name.

2b Shew forth his salvation from day to day.

3 Declare his glory among the Gentiles: his wonders among all people.

5b The Lord made the heavens.

6 Praise and beauty are before him: holiness and majesty in his sanctuary.

32 A light of revelation to the Gentiles and glory for your people Israel.

Gospel: Luke 2: 22-35
22 And after the days of her purification, according to the law of Moses, were accomplished, they carried him to Jerusalem, to present him to the Lord:

23 As it is written in the law of the Lord: Every male opening the womb shall be called holy to the Lord:

24 And to offer a sacrifice, according as it is written in the law of the Lord, a pair of turtledoves, or two young pigeons:

25 And behold there was a man in Jerusalem named Simeon, and this man was just and devout, waiting for the consolation of Israel; and the Holy Ghost was in him.

26 And he had received an answer from the Holy Ghost, that he should not see death, before he had seen the Christ of the Lord.

27 And he came by the Spirit into the temple. And when his parents brought in the child Jesus, to do for him according to the custom of the law,

28 He also took him into his arms, and blessed God, and said:

29 Now thou dost dismiss thy servant, O Lord, according to thy word in peace;

30 Because my eyes have seen thy salvation,

31 Which thou hast prepared before the face of all peoples:

32 A light to the revelation of the Gentiles, and the glory of thy people Israel.

33 And his father and mother were wondering at those things which were spoken concerning him.

34 And Simeon blessed them, and said to Mary his mother: Behold this child is set for the fall, and for the resurrection of many in Israel, and for a sign which shall be contradicted;

35 And thy own soul a sword shall pierce, that, out of many hearts, thoughts may be revealed.