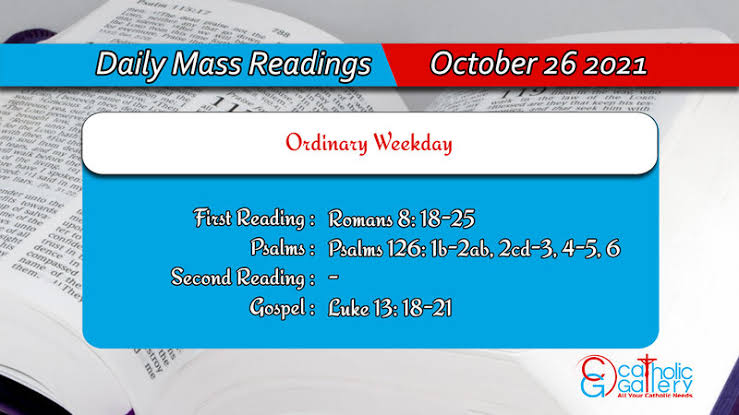 Welcome to Catholic Daily Mass Reading Tuesday, 26 October 2021. May the Almighty Father bless you through this Holy mass. God bless you! Kindly share with other people.

First Reading: Romans 8: 18-25
18 For I reckon that the sufferings of this time are not worthy to be compared with the glory to come, that shall be revealed in us.

20 For the creature was made subject to vanity, not willingly, but by reason of him that made it subject, in hope:

21 Because the creature also itself shall be delivered from the servitude of corruption, into the liberty of the glory of the children of God.

22 For we know that every creature groaneth and travaileth in pain, even till now.

23 And not only it, but ourselves also, who have the firstfruits of the Spirit, even we ourselves groan within ourselves, waiting for the adoption of the sons of God, the redemption of our body.

24 For we are saved by hope. But hope that is seen, is not hope. For what a man seeth, why doth he hope for?

25 But if we hope for that which we see not, we wait for it with patience.

1 When the lord brought back the captivity of Sion, we became like men comforted.

2ab Then was our mouth filled with gladness; and our tongue with joy.

2cd Then shall they say among the Gentiles: The Lord hath done great things for them.

3 The Lord hath done great things for us: we are become joyful.

4 Turn again our captivity, O Lord, as a stream in the south.

5 They that sow in tears shall reap in joy.

6 Going they went and wept, casting their seeds. But coming they shall come with joyfulness, carrying their sheaves.

25 Blessed are you, Father, Lord of heaven and earth; you have revealed to little ones the mysteries of the Kingdom.

19 It is like to a grain of mustard seed, which a man took and cast into his garden, and it grew and became a great tree, and the birds of the air lodged in the branches thereof.

20 And again he said: Whereunto shall I esteem the kingdom of God to be like?

21 It is like to leaven, which a woman took and hid in three measures of meal, till the whole was leavened.