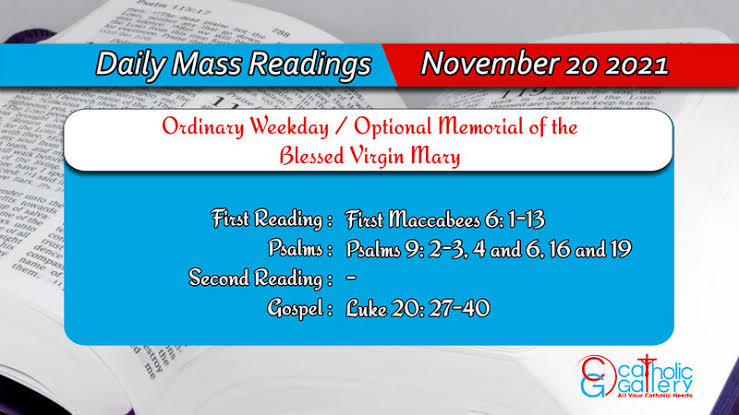 Welcome to Catholic Daily Mass Readings Saturday, 20 November 2021. May the Almighty Father bless you through this Holy mass. God bless you! Kindly share with other people.

First Reading: First Maccabees 6: 1-13
1 Now king Antiochus was going through the higher countries, and he heard that the city of Elymais in Persia was greatly renowned, and abounding in silver and gold.

2 And that there was in it a temple, exceeding rich: and coverings of gold, and breastplates, and shields which king Alexander, son of Philip the Macedonian that reigned first in Greece, had left there.

3 Lo, he came, and sought to take the city and to pillage it: But he was not able, because the design was known to them that were in the city.

4 And they rose up against him in battle, and he fled away from thence, and departed with great sadness, and returned towards Babylonia.

5 And whilst he was in Persia, there came one that told him, how the armies that were in the land of Juda were put to flight:

6 And that Lysias went with a very great power, and was put to flight before the face of the Jews, and that they were grown strong by the armour, and power, and store of spoils, which they had gotten out of the camps which they had destroyed:

7 And that they had thrown down the abomination which he had set up upon the altar in Jerusalem, and that they had compassed about the sanctuary with high walls as before, and Bethsura also his city.

8 And it came to pass when the king heard these words, that he was struck with fear, and exceedingly moved: and he laid himself down upon his bed, and fell sick for grief, because it had not fallen out to him as he imagined.

10 And he called for all his friends, and said to them: Sleep is gone from my eyes, and I am fallen away, and my heart is cast down for anxiety.

11 And I said in my heart: Into how much tribulation am I come, and into what floods of sorrow, wherein now I am: I that was pleasant and beloved in my power!

12 But now I remember the evils that I have done in Jerusalem, from whence also I took away all the spoils of gold, and of silver that were in it, and I sent to destroy the inhabitants of Judah without cause.

13 I know therefore that for this cause these evils have found me: and behold I perish with great grief in a strange land.

2 I will give praise to thee, O Lord, with my whole heart: I will relate all thy wonders.

3 I will be glad and rejoice in thee: I will sing to thy name, O thou most high.

4 When my enemy shall be turned back: they shall be weakened and perish before thy face.

6 Thou hast rebuked the Gentiles, and the wicked one hath perished: thou hast blotted out their name for ever and ever.

16 I will rejoice in thy salvation: the Gentiles have stuck fast in the destruction which they have prepared. Their foot hath been taken in the very snare which they hid.

19 For the poor man shall not be forgotten to the end: the patience of the poor shall not perish for ever.

10 Our Savior Jesus Christ has destroyed death and brought life to light through the Gospel.

Gospel: Luke 20: 27-40
27 And there came to him some of the Sadducees, who deny that there is any resurrection, and they asked him,

28 Saying: Master, Moses wrote unto us, If any man’s brother die, having a wife, and he leave no children, that his brother should take her to wife, and raise up seed unto his brother.

29 There were therefore seven brethren: and the first took a wife, and died without children.

30 And the next took her to wife, and he also died childless.

31 And the third took her. And in like manner all the seven, and they left no children, and died.

32 Last of all the woman died also.

33 In the resurrection therefore, whose wife of them shall she be? For all the seven had her to wife.

34 And Jesus said to them: The children of this world marry, and are given in marriage:

35 But they that shall be accounted worthy of that world, and of the resurrection from the dead, shall neither be married, nor take wives.

38 For he is not the God of the dead, but of the living: for all live to him.

39 And some of the scribes answering, said to him: Master, thou hast said well.

40 And after that they durst not ask him any more questions.