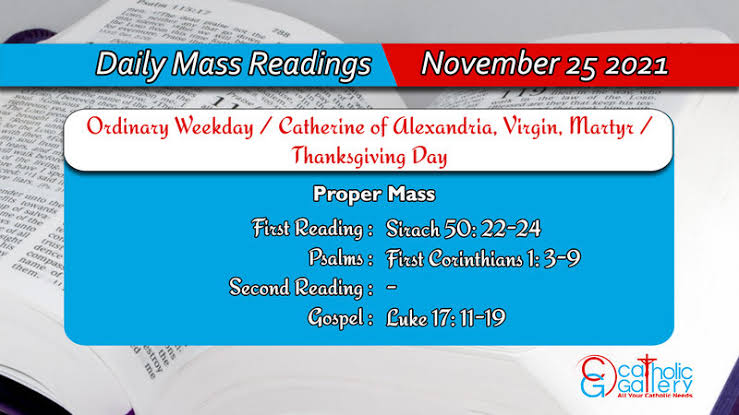 Welcome to Catholic Daily Mass Readings Thursday, 25th November 2021. May the Almighty Father bless you through this Holy mass. God bless you! Kindly share with other people.

13 And they came and spoke to the king concerning the edict: O king, hast thou not decreed, that every man that should make a request to any of the gods, or men, for thirty days, but to thyself, O king, should be cast into the den of the lions? And the king answered them, saying: The word is true according to the decree of the Medes and Persians, which it is not lawful to violate.

14 Then they answered, and said before the king: Daniel, who is of the children of the captivity of Juda, hath not regarded thy law, nor the decree that thou hast made: but three times a day he maketh his prayer.

15 Now when the king had heard these words, he was very much grieved, and in behalf of Daniel he set his heart to deliver him and even till sunset he laboured to save him.

16 But those men perceiving the king’s design, said to him: Know thou, O king, that the law of the Medes and Persians is, that no decree which the king hath made, may be altered.

17 Then the king commanded, and they brought Daniel, and cast him into the den of the lions. And the king said to Daniel: Thy God, whom thou always servest, he will deliver thee.

18 And a stone was brought, and laid upon the mouth of the den: which the king sealed with his own ring, and with the ring of his nobles, that nothing should be done against Daniel.

19 And the king went away to his house and laid himself down without taking supper, and meat was not set before him, and even sleep departed from him.

20 Then the king rising very early in the morning, went in haste to the lions’ den:

21 And coming near to the den, cried with a lamentable voice to Daniel, and said to him: Daniel, servant of the living God, hath thy God, whom thou servest always, been able, thinkest thou, to deliver thee from the lions?

22 And Daniel answering the king, said: O king, live for ever:

23 My God hath sent his angel, and hath shut up the mouths of the lions, and they have not hurt me: forasmuch as before him justice hath been found in me: yea and before thee, O king, I have done no offence.

25 And by the king’s commandment, those men were brought that had accused Daniel: and they were cast into the lions’ den, they and their children, and their wives: and they did not reach the bottom of the den, before the lions caught them, and broke all their bones in pieces.

26 Then king Darius wrote to all people, tribes, and languages, dwelling in the whole earth: PEACE be multiplied unto you.

27 It is decreed by me, that in all my empire and my kingdom all men dread and fear the God of Daniel. For he is the living and eternal God for ever: and his kingdom shall not be destroyed, and his power shall be for ever.

28 He is the deliverer, and saviour, doing signs and wonders in heaven, and in earth: who hath delivered Daniel out of the lions’ den.

68 O ye dews and hoar frosts, bless the Lord: praise and exalt him above all for ever.

69 O ye frost and cold, bless the Lord: praise and exalt him above all for ever.

70 O ye ice and snow, bless the Lord: praise and exalt him above all for ever.

71 O ye nights and days, bless the Lord: praise and exalt him above all for ever.

72 O ye light and darkness, bless the Lord: praise and exalt him above all for ever.

73 O ye lightnings and clouds, bless the Lord: praise and exalt him above all for ever.

74 O let the earth bless the Lord: let it praise and exalt him above all for ever.

28 Stand erect and raise your heads because your redemption is at hand.

Gospel: Luke 21: 20-28
20 And when you shall see Jerusalem compassed about with an army; then know that the desolation thereof is at hand.

22 For these are the days of vengeance, that all things may be fulfilled, that are written.

23 But woe to them that are with child, and give suck in those days; for there shall be great distress in the land, and wrath upon this people.

24 And they shall fall by the edge of the sword; and shall be led away captives into all nations; and Jerusalem shall be trodden down by the Gentiles; till the times of the nations be fulfilled.

25 And there shall be signs in the sun, and in the moon, and in the stars; and upon the earth distress of nations, by reason of the confusion of the roaring of the sea and of the waves;

26 Men withering away for fear, and expectation of what shall come upon the whole world. For the powers of heaven shall be moved;

27 And then they shall see the Son of man coming in a cloud, with great power and majesty.

28 But when these things begin to come to pass, look up, and lift up your heads, because your redemption is at hand.