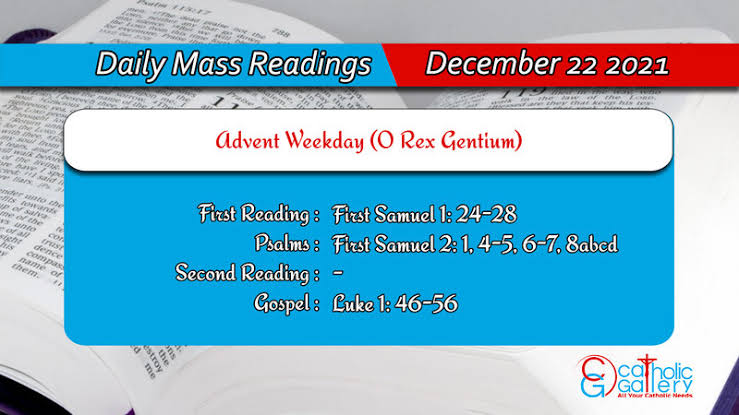 Welcome to Catholic Daily Mass Readings Wednesday, 22nd December 2021. May the Almighty Father bless you through this Holy mass. God bless you! Kindly share with other people.

First Reading: First Samuel 1: 24-28
24 And after she had weaned him, she carried him with her, with three calves, and three bushels of flour, and a bottle of wine, and she brought him to the house of the Lord in Silo. Now the child was as yet very young:

25 And they immolated a calf, and offered the child to Heli.

26 And Anna said: I beseech thee, my lord, as thy soul liveth, my lord: I am that woman who stood before thee here praying to the Lord.

27 For this child did I pray, and the Lord hath granted me my petition, which I asked of him.

28 Therefore I also have lent him to the Lord all the days of his life, he shall be lent to the Lord. And they adored the Lord there. And Anna prayed, and said:

1 My heart hath rejoiced in the Lord, and my horn is exalted in my God: my mouth is enlarged over my enemies: because I have joyed in thy salvation.

4 The bow of the mighty is overcome, and the weak are girt with strength.

5 They that were full before have hired out themselves for bread: and the hungry are filled, so that the barren hath borne many: and she that had many children is weakened.

6 The Lord killeth and maketh alive, he bringeth down to hell and bringeth back again.

7 The Lord maketh poor and maketh rich, he humbleth and he exalteth.

8abcd He raiseth up the needy from the dust, and lifteth up the poor from the dunghill: that he may sit with princes, and hold the throne of glory.

O King of all nations and keystone of the Church: come and save man, whom you formed from the dust!

47 And my spirit hath rejoiced in God my Saviour.

48 Because he hath regarded the humility of his handmaid; for behold from henceforth all generations shall call me blessed.

49 Because he that is mighty, hath done great things to me; and holy is his name.

50 And his mercy is from generation unto generations, to them that fear him.

51 He hath shewed might in his arm: he hath scattered the proud in the conceit of their heart.

52 He hath put down the mighty from their seat, and hath exalted the humble.

53 He hath filled the hungry with good things; and the rich he hath sent empty away.

54 He hath received Israel his servant, being mindful of his mercy:

55 As he spoke to our fathers, to Abraham and to his seed for ever.

56 And Mary abode with her about three months; and she returned to her own house.

[mc4wp_form]
By signing up, you agree to our Terms of Use and acknowledge the data practices in our Privacy Policy. You may unsubscribe at any time.
TheGospelNG December 21, 2021
Previous Article 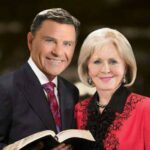